The Legend of Quan Yin

One of the deities most frequently seen on altars in China’s temples is Quan Yin (also spelled Kwan Yin, Kuanyin; in pinyin, Guanyin). In Sanskrit, her name is Padma-pâni, or “Born of the Lotus.” Regarded by the Chinese as the goddess of mercy, she was originally male until the early part of the 12th century and has evolved since that time from her prototype, Avalokiteshvara, “the merciful lord of utter enlightment,” an Indian bodhisattva who chose to remain on earth to bring relief to the suffering rather than enjoy for himself the ecstasies of Nirvana. One of the several stories surrounding Quan Yin is that she was a Buddhist who through great love and sacrifice during life, had earned the right to enter Nirvana after death. However, like Avlokiteshvara, while standing before the gates of Paradise she heard a cry of anguish from the earth below. Turning back to earth, she renounced her reward of bliss eternal but in its place found immortality in the hearts of the suffering. In China she has many names and is also known as “great mercy, great pity; salvation from misery, salvation from woe; self-existent; thousand arms and thousand eyes,” etc. In addition she is often referred to as the Goddess of the Southern Sea — or Indian Archipelago — and has been compared to the Virgin Mary. She is one of the San Ta Shih, or the Three Great Beings, renowned for their power over the animal kingdom or the forces of nature. These three Bodhisattvas or P’u Sa as they are know in China, are namely Manjusri (Skt.) or Wên Shu, Samantabhadra or P’u Hsien, and Avalokitesvara or Quan Yin.

Quan Yin is a shortened form of a name that means One Who Sees and Hears the Cry from the Human World. Her Chinese title signifies, “She who always observes or pays attention to sounds,” i.e., she who hears prayers. Sometimes possessing eleven heads, she is surnamed Sung-Tzu-Niang-Niang, “lady who brings children.” She is goddess of fecundity as well as of mercy. Worshipped especially by women, this goddess comforts the troubled, the sick, the lost, the senile and the unfortunate. Her popularity has grown such through the centuries that she is now also regarded as the protector of seafarers, farmers and travelers. She cares for souls in the underworld, and is invoked during post-burial rituals to free the soul of the deceased from the torments of purgatory. There are temples all over China dedicated to this goddess, and she is worshipped by women in South China more than in the North, on the 19th day of the 2nd, 6th and 9th moons. (For example, it is a prevalent birth custom in Foochow that when a family has a daughter married since the 15th day of the previous year, who has not yet given birth to a male infant, a present of several articles is sent to her by her relatives on a lucky day between the 5th and 14th of the first month. The articles sent are as follows: a paper lantern bearing a picture of the Goddess of Mercy, Quan Yin, with a child in her arms, and the inscription, “May Quan Yin present you with a son”; oysters in an earthenware vessel; rice-cakes; oranges; and garlic.) Worshippers ask for sons, wealth, and protection. Her temple on the island of Putuoshan, in the Chusan Archipelago, is sacred to the Buddhists, the worship of Quan Yin being its most prominent feature on account of the fact that the Goddess is said to have resided there for nine years. The full name of the island is P’u t’o lo ka, from Mount Pataloka, whence the Goddess, in her transformation as Avalokiteshvara, looks down upon mankind. There are nearly a hundred monasteries and temples on the island, with over a thousand monks. Miao Feng Shan (Mount of the Wondrous Peak) attracts large numbers of pilgrims, who use rattles and fireworks to emphasize their prayers and attract her attention.

No other figure in the Chinese pantheon appears in a greater variety of images, of which there are said to be thousands of different incarnations or manifestations. Quan Yin is usually depicted as a barefoot, gracious woman dressed in beautiful, white flowing robes, with a white hood gracefully draped over the top of the head and carrying a small upturned vase of holy dew. (However, in the Lamaistic form she is often entirely naked.) She stands tall and slender, a figure of infinite grace, her gently composed features conveying the sublime selflessness and compassion that have made her the favorite of all deities. She may be seated on an elephant, standing on a fish, nursing a baby, holding a basket, having six arms or a thousand, and one head or eight, one atop the next, and four, eighteen, or forty hands, which which she strives to alleviate the sufferings of the unhappy. She is frequently depicted as riding a mythological animal known as the Hou, which somewhat resembles a Buddhist lion, and symbolises the divine supremacy exercised by Quan Yin over the forces of nature. Her bare feet are the consistent quality. On public altars, Quan Yin is frequently flanked by two aides, a barefoot, shirtless youth with his hands clapsed in prayer, and a maid demurely holding her hands together inside her sleeves. Her principal feast occurs yearly on the nineteenth day of the second lunar month.

According to one ancient legend her name was Miao Shan, and she was the daughter of an Indian Prince. It is related that she was a pious follower of Buddha. In order to convert her blind father, she visited him transfigured as a stranger, and informed him that were he to swallow an eyeball of one of his children, his sight would be restored. His children would not consent to the necessary sacrifice, whereupon the future goddess created an eye which her parent swallowed and he regained his sight. She then persuaded her father to join the Buddhist priesthood by pointing out the folly and vanity of a world in which children would not even sacrifice an eye for the sake of a parent.

As related in yet another legend she was said to be the daughter of a sovereign of the Chou dynasty, who strenously opposed her wish to be a nun, and was so irritated by her refusal to marry that he put her to humiliating tasks in the convent. This means of coercion failed, and her father then ordered her to be executed for disobedience to his wishes. But the executioner, a man of tender heart and some forethought, brought it about that the sword which was to descend upon her should break into a thousand pieces. Her father thereupon ordered her to be stifled. As the story goes, she forthwith went to Hell, but on her arrival the flames were quenched and flowers burst into bloom. Yama, the presiding officer, looked on in dismay at what seemed to be the summary abolition of his post, and in order to keep his position he sent her back to life again. Carried in the fragrant heart of a lotus flower she went to the island of Putuo, near Ningbo. One day her father fell ill and according to a Chinese custom, she cut the flesh from her arms that it might be made into medicine. A cure was effected, and in his gratitude her father ordered her statue to be made “with completely-formed arms and eyes.” Owing to a misunderstanding of the orders the sculptor carved the statue with many heads and many arms, and so it remains to this day.

The image of this divinity is generally placed on a special altar at the back of the great Shakyamuni Buddha behind a screen, and facing the north door, in the second half of the Buddhist monastery. Quan Yin is also worshipped by the Taoists, and they imitate the Buddhists in their descriptions of this deity, speaking in the same manner of her various metamorphoses, her disposition to save the lost, her purity, wisdom, and marvel-working power.

From early Ch’ing times to the present, many thousands of statues of Quan Yin have been carved in jade. The Maternal Goddess, the Protectress of Children, the Observer of All Sounds, Quan Yin is a favorite figure in domestic shrines. As well, her image is carved on small jades which Chinese women offer faithfully at the temples dedicated to her. 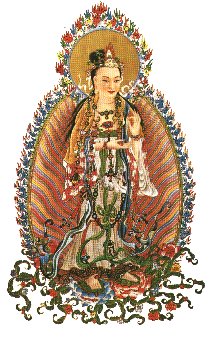