On this special occasion, as we celebrate the opening of Tsechen Kunchab Ling, it is very auspicious to give this teaching known as Parting from the Four Attachments. This teaching, which is from the category of teachings known as mind training, was given directly by the Bodhisattva Manjushri to the great Lama Sakyapa Kunga Nyingpo.

Recite this refuge prayer as many times as possible, very mindfully. At the conclusion of the refuge, we recite another prayer:

In the Buddha, Dharma, and excellent Sangha, I take refuge until enlightenment is reached. Through deeds of giving and the like, may I attain Buddhahood for the sake of all sentient beings.

Giving and the like refers to the six perfections or paramitas, which are generosity, moral conduct, patience, diligence, meditation and wisdom. Another recitation is:

I must attain Buddhahood for the sake of all sentient beings. For that purpose I will diligently accomplish virtuous deeds of body, voice and mind.

In other words, the goal of activity of body, voice, or mind, is to attain enlightenment for the benefit of all sentient beings.
Main Teaching: Non-Attachment to This Life
To practice this meditation, sit in a conducive place where there are no external disturbances. Try also to avoid internal disturbances such as conceptual thoughts. Sit cross-legged and after reciting the refuge and enlightenment mind, contemplate the first line of the teaching, which is: "If you have attachment to this life, you are not a religious person."
The general contents of this first line are common to the Hinayana, Mahayana, and Vajrayana traditions. The first line directly describes the right way and the wrong way to practice Dharma.
Right Dharma practice, pure Dharma practice, is without attachment to this life. Practicing Dharma with attachment to this life is not real Dharma; it is still a worldly activity. Just like a mirage that appears to be water but does not quench one's thirst, such activity is apparently Dharma but does not liberate one from the sufferings of samsara.
If you practice Dharma with attachment to this life, any practice that you do, whether it is moral conduct, study, contemplation, or meditation, will not even result in the accomplishment of prosperity in this life. If the goal of your Dharma practice is to gain fame, disciples or wealth, the practice will become the seed of the lower realms and samsara, instead of becoming the seed of liberation and enlightenment. This is not correct Dharma practice.
The great Indian master Vasu-bandhu said, Upon a base of sound moral conduct, hear, contemplate, and thoroughly apply oneself to meditation.

To be pure Dharma, whatever practice you do should not be mixed with attachment to this life. This is because this life is very temporary. Very few people live longer than a hundred years. This life is also without essence; everything is impermanent and it is not really worthy of any attachment. The goal of the Dharma path has many different levels. One should at least practice for a purpose beyond this life; in other words, at least for the next life.
The first line of the teaching, "If you have attachment to this life, you are not a religious person," directly explains the right and wrong way to practice Dharma. Indirectly it points to the difficulty of obtaining a precious human birth endowed with the eighteen prerequisites, and the importance of diligently practicing Dharma without any delay because of impermanence.
Not only humans, but every sentient being possesses Buddha nature. The true nature of every sentient being's mind is unstained by obscurations. Any sentient being that meets with the right methods has the opportunity to become a fully enlightened Buddha. However, among the six types of sentient beings, human beings have the best chance to accomplish Buddhahood. Therefore this human life endowed with the eighteen prerequisites is very precious and difficult to find. As the great Indian master Shantideva said in the Guide to the Bodhisattva's Way of Life:

Leisure and endowment are extremely difficult to find, and accomplish the purpose of beings. If this benefit is not accomplished, how will they come about again?

Second, we contemplate the uncertainty of the time of death. Nobody can tell how long he will live. We never know when death will occur. Looking around us, many beings die even before they are born, in the womb. Some die when they are born. Some die in infancy, and so on. No one knows for sure when he will die.
Although there are many external and internal conditions that shorten life, there are very few conditions that prolong life. Even those methods that usually prolong life, such as food and medicine, can also become the cause of death.
No one has a definite, fixed life-span. Even supporting conditions such as youth, health, privilege, wealth, comfortable surroundings and the like do not guarantee that one will live long. We all know healthy people who pass away suddenly before the chronically ill pass away; young people who die before the aged; wealthy people with every facility and opportunity who die before the destitute. Nothing can guarantee that one will live for any certain duration of time.
Third, contemplate that only the Dharma can benefit us at the time of death. All worldly wealth, power, fame, or knowledge is of no use in eluding death. At the time of death, the holy Dharma is the only thing upon which we can rely. We must practice diligently while we are still alive and have the benefits of relative youth and health. By devoting ourselves to the path of Dharma now, even if we cannot accomplish concrete results, at least we will not feel regret at the time of death.
By practicing the Dharma, we can have confidence that at least we will be born in a higher realm. Superior Dharma practitioners pass away with full confidence, as if they are returning to their own home. Middling practitioners face their death without hesitation. Lesser practitioners at least pass away without regretting that they have wasted their opportunity to practice the Dharma. Thinking of the certainty of death, and the uncertainty of the time of death, we must practice the Dharma immediately without delay.
This concludes the teaching on the first line of Parting from the Four Attachments which is, "If you have attachment to this life, you are not a religious person."

When receiving Dharma teachings, it is always important to generate right motivation and to practice the right conduct. One should listen with a mind free from the three faults of a container. These faults are an upside-down container that does not concentrate on the teachings; a container with a hole in it that forgets what was taught; and a dirty container that listens with a mind filled with negative emotion. It is also important to listen to the teachings with the right attitude.

This teaching was first given by the great Bodhisattva Manjushri to Sachen Kunga Nyingpo, the first of the five founders of the Sakya Order. The teaching consists of three parts: the preliminary part, main part, and conclusion. The preliminary part explains how to change from the wrong path to the right path by taking refuge, and then how to change from the lower path to the higher path by generating enlightenment mind. (These preliminaries were covered in Part I, contained in the previous issue.) The main part of the teaching that was given by Manjushri to Sachen Kunga Nyingpo consists of four lines:
“If you have attachment to this life, you are not a religious person.
If you have attachment to the world of existence, you do not have renunciation.
If you have attachment to your own purpose, you do not have enlightenment thought.
If grasping arises, you do not have the view.” 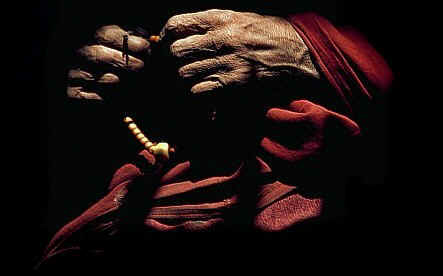