Bits and Pieces
The Avalokitesvara Mantra is 'Om Mani Padme Hum'. It contains 6 syllabus. Each syllable represents each of the 6 realms in the world of Samsara (Deva, Semi deva, Humans, Animals, Hungry Ghosts or Petas and Hell). When a being from any of the 6 realms hears this mantra, it will immediately cast away all angry thoughts and be enlightened.
The vase held by Avalokitesvara contains 'Amrita', meaning the Dew of Compassion. It can purify the defilements of our body, speech and mind. It also contains curative powers and can extend life. 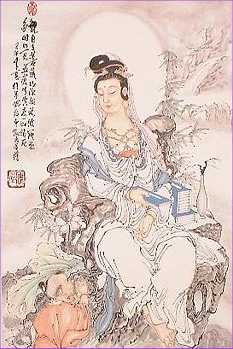