Om Ah Hum Benza Guru Padme Siddhi Hum is the mantra of the great lotus born Guru Padmasambhava. The Buddha Amitabha gathered the energy of all the Buddhas of the ten thousand directions into his heart center and transmitted this pure light into a lotus flower in Lake Danakosha in the country of Odiyana. From this lotus flower the immaculant Padmasambhava was born. India and China had already been Buddhist nations for centuries but Tibet had too many obscurations to be fully endowed with the Dharma. They needed a nirmanakaya Buddha with the power over time and space and the wrathful compassion to lead Tibet out of its sleeping stupor. Therefore the wisdom Buddha Manjushri took reincarnation as the king of Tibet, Trisong Detsun, and invited Padmasambhava to establish the exremely potent Vajrayana Buddhist teachings there.
Though Guru Padmasambhava was fully enlightened at birth he reabsorbed all the Buddha's teachings on earth and in space and spread them throughout India, China, Tibet, Mongolia, Buhtan, Nepal, Jang and Hor. After subduing the hostile forces of Tibet he established the cosmic mandala of Samye Monastery to firmly plant all of the Buddha's teaching in Tibet. He invited many great masters from India and China to translate and transmit the complete spectrum of Buddhism there. Samye Monastery was built and concencrated as a sacred mandala that represented the cosmos with the three floors of the monastery representing the three great Buddhist nations of India, China and Tibet. The Indian floor represented the Hinayana and vinaya teachings, the Chinese floor represented the Mahayana and dhyana teachings, and the tibetan floor represented the Vajrayana and tantra teachings. All together the three vehicles of Buddhism were fully planted and the great wish of the Dharma King Trisong Detsun was fulfilled.
Even today the energy at Samye Monastery some fourteen hundred years later is really intense. Behind the monastery is Mala Mountain and the 108 caves of Samye Chimpu where practitioners go on retreat. There pilgrims can witness many modern day miracles such as self imminating statues in the cave walls, hand and foot prints of Padmasambhava and other great masters, and even Padmasambhava's finger drawings in solid rock. The number of sentient beings that reach enlightenment here past, present and future are innumerable for the blessings that flow through this cosmic mandala are infinite.
Om Ah Hum Benza Guru Padme Siddhi Hum is the mantra of Padmasambhava and its blessings are swift. There are vast meanings on the inner, outer and sectret levels of this mantra and also has a multitude of esoteric applications.
Om is the seed syllable of the crown chakra.
Ah is the seed syllable of the throat chakra.
Hum is the seed syllable of the heart center.
Benza means diamondtine awareness.
Guru means teacher.
Padme means lotus.
Siddhi means extrodinary power.
Hum primordial luminosity of all things.
Om Ah Hum Benza Guru Padme Siddhi Hum on an outer level is a simple suplication to Padmasambhava. It means; Oh great lotus born guru who bestows the diamondtine awareness empowerment to my body, speech and mind. Please bestow the great spiritual siddhi powers upon me and ripen my being so that I may never be seperated from primordial luminosity.
There are millions of ways and means to translate and understand Om Ah Hum Benza Guru Padme Siddhi Hum but by visualizing Padmasambhava floating in the sky recite the mantra and recieve his blessings. when you recite Om visualize a white light coming from Padmasambhava's forehead and disolving into yours purifying and empowering you with the body of a buddha. When you recite Ah visualize a red light coming from Padmasambhava's throat center and disolving into yours purifying and empowering you with the speech of a Buddha. When you recite Hum visualize a blue light coming from Padmasambhava's heart center and disolving into yours purifying and empowering you with the mind of a Buddha. As you recite Benza Guru Padme Siddhi Hum allow rainbow light to eminate from your heart center and into the ten thousand directions purifying the body, speech and mind of all the sentient beings in samsara. when you are done with your recitation transform Padmasambhava into a vajra and draw him into your Brahman aperture, down through your central channel and into your heart center. Allow the vajra to increase the rainbow light emminating from your heart center.
Visualizing the lotus born guru Padmasambhava in the sky in front of you is an invocation from the enlightened aspect of your own Buddha mind. Reciting Om Ah Hum Benza Guru Padme Siddhi Hum with faith, love, devotion, compassion and wisdom bestows all of the spiritual powers and qualities your mind can concieve of. On the outer aspect continual recitation will bring you closer to Padmasambhava and his Buddha field of copper colored mountains. On a inner aspect continual recitation will purify all of your energy centers and channel systems transforming your body into a Buddha field. On the secret aspect continual recitation will open your mind to the realization that Padmasambhava is you and you are Padmasambhava and that you have been so since beginningless time.
With Amitabha on the crown of my head I praise the transcended light.
With Avolokitshvara in my throat center I praise the compassion beyond dualistic fixation.
With Padmasambhava in my heart center I praise the rainbow beyond time and space.
May all being reach enlightenment through the Buddha Dharma.
Om Ah Hum 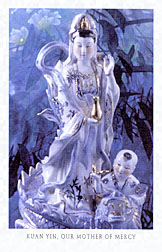