Magicians have used mantras in the performance of magic since the time of the ancient Egyptians and Assyrians. Mantras are considered "names of power" and have been used in conjuring up deities and casting spells. The history of their use continues from the Egyptians and Hebrews through the Gnostics, especially Simon Magus, as well as in the Eastern religions, such as Hinduism and Buddhism, and sects to the present.
The secret names of God such as Yahweh, Adomai and Elohim were considered very powerful mantras. Nonsensical syllables derived from selecting the first letters of various scriptural verses also composed mantras.
Om, the Supreme Reality, is the most sacred mantra of the Hindu. It represents the sound from which the universe was created. There is a variety of Om mantras: Om, Tat, Sat, Om, meaning "O Thou Self-exisent One."
A Buddhist mantra is Om mani padme hum, which is translated as "O, Jewel of the Lotus, Hum," or "The Supreme Reality (is the) jewel of Oneness." The Om mani padme hum mantra also is called the Mani mantra and is used by many Buddhists constantly for many purposes such as enhancing bodily washings and eliminations, and to heal. In the Pure Land sect, the mantra is used to ask fore entry into the Pure Land after death. Many wear these mantras as amulets to ward off evil and bad luck.
In Buddhism the repetition of Om in meditation helps to create spiritual light and power to cleanse the subtle body and do away with disharmony.
Exorcists in Sri Lanka use secrets mantras to expels demons and ghosts believed responsible for possession, illness and misfortune. The mantras are used in the accompaniment of drums, dancing and curative oils.
In the 20th century, Aleister Crowley created his AUMGN mantra. To Crowley it was an expression of the Om mantra which he believed to be the magical formulae of the universe. He thought the sound vibrations of AUMGN were so powerful that any magician using it would be able to control the uninersal forces. A.G.H. 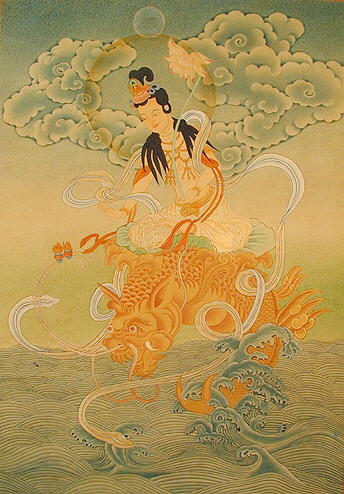