Avalokiteshvara, the Bodhisattva of absolute compassion, is one of the most important deities of Tibetan Buddhism. Literally, his name means "Lord who [mercifully] looks Down upon the world." He is the primary Bodhisattva of the jina Buddha Amitabha, who presides over the present kalpa, or eon. Avalokiteshvara's association with Amitabha, as well as the Bodhisattva's ability to aid all those in need of his help, has made him one of the most popular deities of lay devotion. However, as a demonstration of the compassion of all Buddhas, Avalokiteshvara also plays an important role in Tantric Buddhism. Although dressed as an Indian prince and bearing other Bodhisattva attributes, in several contexts, Avalokiteshvara is a fully enlightened Buddha. As the main meditational deity of various Tantras, he functions as the arya, or central figure, from whom all other deities emanate (The Seventh Dalai Lama, 191).

In the SAMA painting, Avalokiteshvara is shown in his Ekadasamukha, or eleven-headed, form presiding over his perfected land, Potolaka. He is shown with eight arms, the main pair held against his chest, concealing the jewel of enlightenment. Through devotion to Avalokiteshvara, the jewel is made visible to those who attain the religious goal. In his upper right and left hands, he holds prayer beads and a lotus, respectively. Prayer beads are used for the recitation of Avalokiteshvara's main mantra, OM MANI PADME HUM. Each syllable in the mantra represents one of the six realms of rebirth, namely the heaven worlds of the devas; the realm of the asuras; the saha, or human world; the animal realm, the pretaloka, or realm of the hungry ghosts; and the various hells. Avalokiteshvara may appear in any of the six realms to help those in need. The lotus, in his left hand, symbolizes the potential of enlightenment through the realization of absolute compassion (Rhie & Thurman, 143). In his middle hands, he holds a chakra, or wheel, and a bow and arrow. These represent the Buddhist teachings and the attainment of wisdom through meditation, respectively. His lower right hand is in varada, or bestowal, gesture. A small kundika, or jar containing ambrosia, is held in his lower left hand (Rhie & Thurman, 143).

His eleven heads symbolize the dasabhumis, or ten stages of enlightenment. The eleventh head, seen above all the rest, is that of Avalokiteshvara's progenitor, the Buddha Amitabha. This visual association further attests to Avalokiteshvara's existence as a fully enlightened Buddha (Rhie & Thurman, 143).

Despite what appears to be an elaborate, complicated painting, the fundamental message it communicates is the potential of one's own enlightenment through the belief in Avalokiteshvara. This idea is communicated individually, through each figure, as well as through specific groups within the painting. The figures along the vertical axis of the painting communicate the message of potential enlightenment through the thrikaya, or body of the three states of Buddhist existence, system. The thrikaya is another method by which the enlightenment process is defined and illustrated. Hayagriva, a fierce emanation of Avalokiteshvara who through his ardent compassion goes forward and helps all those in need, is depicted at the bottom. Above him, riding on a white lion, is Simhanada, a second form of the Bodhisattva. The main eleven-headed Avalokiteshvara is shown above Simhanada. These three deities together, represent the first state of the thrikaya, namely the nirmanakaya aspect. The Nirmanakaya, or transformational body, figures are considered to be enlightened beings who manifest themselves in the earthly realm. They are the more accessible, direct archetypes of religious attainment.

Above the image of Amitabha, is the four-headed Buddha Sarvavid Vairochana of the Sarvadurgati Parishodana Tantra. Sarvavid, literally meaning "Universal Knowledge," Vairochana represents the Dharmakaya. The Dharmakaya is the manifestation of the exemplary mode of behavior directed by the totality of Buddhist teachings, or Dharma. The Dharmakaya state is identical to shunyata, the absolute void, which can be understood only through direct experience. Sarvavid Vairochana is thus the personification of the Dharma, and the subsequent realization of shunyata. The five Jina Buddhas are depicted above Sarvavid Vairochana, at the top center. Together, they define the enlightenment of the figures along the axis.

On either side of Hayagriva, along the bottom of the painting, are images of the four lokapala, or guardian kings. Virudhaka carrying a sword and Dhritarashtra with his stringed-instrument, vina, are depicted on the proper right side. On the proper left are Virupaksha with a miniature chaitya and Vaishravana with his characteristic mongoose. The four lokapala, who are traditionally positioned on the fourth terrace of Mount Meru serve to mark and protect the sacred environment of Potolaka. The lokapala further indicate that potolaka is conceptually identical to Mount Meru and Ekadasamukha Avalokiteshvara is a fully enlightened Buddha at the top of the mountain.

Paintings such as these were common offerings by those seeking to accrue merit for deceased family members. By doing so, devotees ensured their relatives a better rebirth. Specifically, this painting belonged to the Nyingma tradition as indicated by the red-capped monks depicted in the top left and right corners. 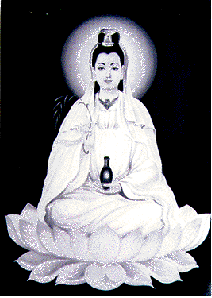