This year, Purple Lotus Society's annual Lunar New Year Purification, Blessing, and Bardo Deliverance Ceremony conducted by Vajra Master Samantha took place on January 28th, 2001 at the Purple Lotus Buddhist School in Union City, California. Several hundred people attended the ceremony. Many students who could not physically attend the ceremony also sent in their names for blessing. Since the Personal Deity of the ceremony was Kuan Yin Bodhisattva, the monks and nuns of Purple Lotus Society have set up a beautiful shrine decorated with crystal lotuses and statues of Kuan Yin (see front cover). After the ceremony, Master Samantha gave a dharma teaching to the audience. The following is an excerpt of that talk pertaining to "how to visualize mantra sounds."
The name of Kuan Yin Bodhisattva literally means "observing the sounds." Instead of listening to the sounds, one observes them. Grand Master has taught us before to observe the sounds. How does one observe the sounds? It is very simple. Earlier, during the ceremony, we were all chanting Kuan Yin's Heart Mantra of "Om Mani Padme Hum." We began our ceremony by clapping our hands and chanting "Om Mani Padme Hum." When we join our palms and greet each other, we chant "Om Mani Padme Hum." We also chant this mantra when we pay homage to the Highest Consciousness of the Universe. Each of the six Sanskrit syllables of Om Mani Padme Hum is associated with a color. Yet, how many people see the colored Sanskrit syllables in their mind when they chant the mantra?
Let me ask all of you, is there anyone here who is able to visualize the Sanskrit syllables and their colors each time he or she chants the mantra? Raise your hand if you do. I will immediately present you a Kuan Yin statue from the shrine here. No? If you don't want to show off by raising your hand now, you can come and tell me in private. [Master and audience laughter] What I have just described is "observing the sounds."
Outside, under the big tree at the school's courtyard, we have on display a banner with the Sanskrit syllables of "Om Mani Padme Hum" in colors. White, green, yellow, blue, red, and black. But how many people really engage their whole being to visualize the syllables? To write them out, to memorize them, and to visualize them during chanting? For example, when we chant "Om, Ah, Hum" to invoke the blessing of the three lights from our Guru, how many of you are really visualizing the Om Sanskrit syllable emitting white light, the Ah syllable emitting red light, and the Hum syllable emitting blue light? To be able to do this is to get profoundly into the practice.
Each time you chant the six syllables of the Kuan Yin's Heart Mantra, "Om Mani Padme Hum," visualize the colored syllables and their lights shining on you. This is observing the mantra sounds. It is tantamount to chanting the mantra in the heart of your heart --- a secret within the secret. You will no longer engage the practice at an ordinary level, but rather at its secret level. Naturally, the magnetic field created this way between Kuan Yin and you will not be like other people's.
That is why I often urge you to enter into your heart and engage your whole being in whatever you are doing or learning. By engaging your mind in a more profound level, you will be able to carry out the task in a more refined, focused, meticulous, and successful manner.
"Kuan Yin" is simply to observe the sounds. Bring the colors and lights and syllables into your heart and fill your whole body with the spinning rainbow lights of the syllables. This will purify the body, mind, and speech. "Om Mani Padme Hum" comes in through the crown chakra, goes down the throat chakra, the heart chakra, the navel chakra, and the root chakra. While listening to each sound, visualize its syllable and color. Bringing the seed syllables into the heart-lotus of your body.
Just doing this Kuan Yin practice can bring you great achievement in your cultivation. When I learned that this was what "observing the sounds" meant, my whole body-mind opened up. It is the same mantra, it depends on how one chants it. While others may only chant with the lips, you chant with your mind and visualize the syllables emitting light. Visualize each syllable clearly, then over time you will naturally find your body to be filled with these six syllables. They will be spinning inside your body. When you open your mouth to speak, what comes out will be the lights of "Om Mani Padme Hum." You may be saying the same thing as someone else, but your words will be more powerful.
When you engage your mind in the Buddha constantly and have the Buddha abiding in your heart-lotus all the time, you will transform yourself into oneness with the Buddha. When that happens, you will naturally be able to accomplish many things others find impossible. For example, others have to sleep ten hours each day, you only need two to three hours of sleep and still have a great deal of energy. You won't waste all those hours sleeping in bed. This is a very secret key. After learning this today, go and start chanting "Om Mani Padme Hum" with your mind instead of just your lips. Learn to write the syllables and visualize the lights emitted from them. Let them merge into your body, speech, and mind. When your body, speech, and mind are constantly being illuminated by these lights from the syllables, they will naturally become purified. 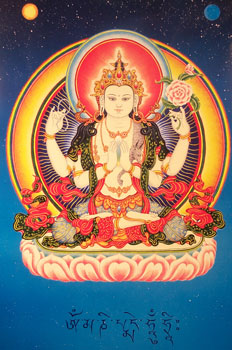