In the Buddhist pantheon of enlightened beings, Avalokiteshvara (Chenrezig) is renowned as the embodiment of the compassion of all the Buddhas, the Bodhisattva of Compassion. Avalokiteshvara is the earthly manifestation of the self born, primordial Amitabha, the Buddha of "Infinite Light and Boundless Compassion". Avalokiteshvara guards this world in the interval between the historical Sakyamuni Buddha, and the next Buddha of the Future, Maitreya. Avalokiteshvara is the essence of great compassion focused on all sentient beings, conjoined with the wisdom which clearly perceives that all phenomena is impermanent, and lacks inherent (independent) existence.
According to legend, Chenrezig made a a vow that he would not rest until he had liberated all beings from suffering. He also vowed that if he became discouraged, he would split into many pieces. After working diligently at this task for a very long time, he looked out and realized the immense number of miserable beings yet to be saved. Seeing this, he became despondent, and split into thousands of pieces. Amitabha Buddha put the pieces back together as a body with eleven heads and 1,000 arms, so that Chenrezig could help many beings at the same time. Depending on the meditation practice given, Chenrezig may be visualized in his other forms; as a Buddha with one head and two arms, or most often, with four arms.
Chenrezig is known by different names in different lands: as Avalokiteshvara in the ancient Sanskrit language of India, as Kuan-yin in China, and as Kannon in Japan. Whenever we are compassionate, or feel altruistic love for anyone, for an animal or any part of the natural world, we experience a taste of our own Chenrezig nature. Buddhists believe that we all share the same innate mind-nature of unconditional compassion and wisdom.

"Om Mani Padme Hum" is the short mantra of Chenrezig. It is said that all the teachings of the Buddha are contained in this mantra. The sound of Aum or Om signifies the three indivisibles of body, speech and mind. Mani means jewel, and Padma means lotus. When Padma changes to Padme, it carries the additional quality of supplication. Avalokiteshvara is also called "The Jewel in the Lotus", and his mantra is "The Jewel Holder" as it holds a treasure of blessings for all who recite it. The six syllables of this mantra close the doorways to rebirth in the lower realms of cyclic existence. The six syllables also contain the essence of the six perfections of generosity, ethical discipline, tolerance or patience, joyous effort, concentration and wise discrimination.

Footnotes
1. These are karmas so heavy that they ripen immediately as a rebirth in the hell realm upon the exhaustion of the karma of this life. The five are: killing one's mother, killing one's father, drawing the blood of a Buddha, killing an arhat and causing disunity among the Sangha. 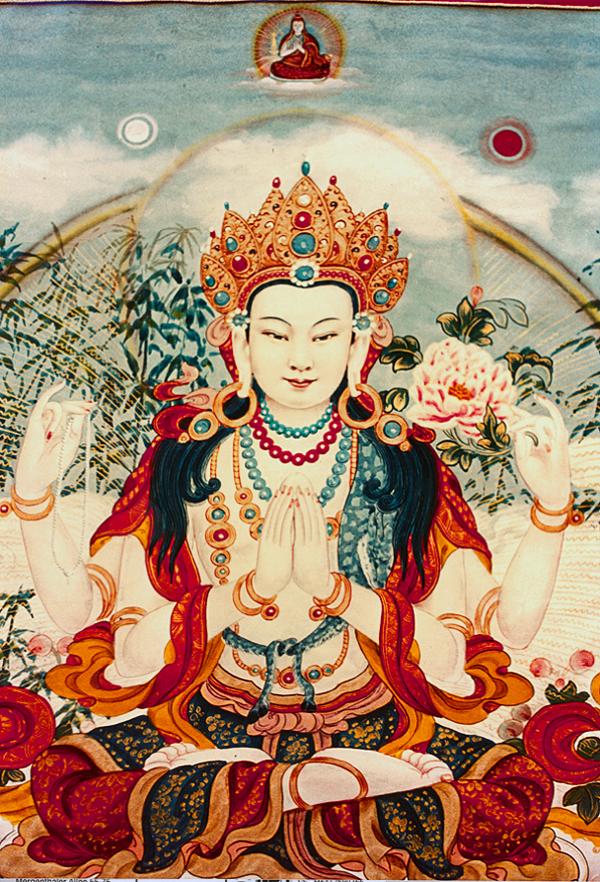