"Chenrezig, hold me fast in your compassion. From time without beginning, living beings have wandered in cyclic existence, undergoing unendurable suffering. They have no other protector than you. Please bless them that they mayachieve the omniscient state of Buddhahood."
In the Mahayana Buddhist tradition Bodhisattvas are those who dedicate themselves to helping all beings reach enlightenment. They choose to remain in the world, taking whatever form is needed, until all beings, from the smallest insects, have gained freedom from the cycle of involuntary birth, death and rebirth. Chenrezig, known as Avalokiteshvara in Sanskrit, is the Bodhisattva of compassion. Amitabha, the Buddha of Infinite Light, sent Chenrezig to help liberate all beings from suffering.
Chenrezig looked on all beings with compassion and saw that they were weighed down by disturbing emotions, such as desire, greed, jealousy, pride, aversion and the blindness of ignorance.
When he saw their immeasurable suffering, he vowed before Amitabha that he would work for the benefit of all beings until every single one of them was liberated. Amitabha promised to help him accomplish this vow. Chenrezig worked for eons until one day he looked to see how many beings he had liberated. To his despair he saw that countless millions of beings were still suffering under their karma and the agony of this made his body split into many small pieces. Seeing this, Amitabha kept his promise and re-assembled the body of Chenrezig, giving him one thousand arms and one thousand eyes so that he could reach out to and watch over all beings.
Earthly embodiments of Chenrezig have appeared throughout history, including Tibet's first king, Srongsten Gampo, and Padmasambhava, who propagated Buddhism in Tibet during the eighth century. Padmasambhava declared Chenrezig to be the patron Bodhisattva of Tibet and widely taught the mantra of Chenrezig: Om Mani Padme Hum, which is now an inextricable part of Tibetan culture. Chenrezig also appears as His Holinesses' the Dalai Lama and the Gyalwa Karmapa, who will continue to reincarnate until all suffering on earth is overcome. 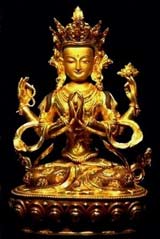