Buddha, Dharma, Sangha From the Ultimate Point of View

This is a translation of the Tibetan Root-text: Mahayanauttaratantrashastra (Tib. Gyu Lama). by Maitreya through Asanga

THE BUDDHA
Homage to the Buddha
The state of a Buddha has no beginning, middle or end. It is perfect peace. Buddhahood itself is fully self-awakened and unfolded (by means of non-dual, primordial wisdom). Having attained enlightenment a Buddha fearlessly shows the path of permanence (of the Dharmakaya) in order to bring realisation to those without realisation.
He wields the supreme sword of knowledge and the vajra of compassion and cuts down the sprout of suffering. Also he destroys the walls of doubt which are surrounded by the thick forest of the various mistaken views. In front of the Buddha I bow down.
The state of a Buddha is endowed with two kinds of benefit, the benefit for oneself and the benfit for others:
· It is non-composite, spontaneously present and not realised through external conditions.
· It is endowed with knowledge, compassionate love and the capacity to help sentient beings.
Buddhahood is non-composite, because by nature it is free from beginning, middle or end. It is said to be spontaneously present, because it is perfect peace, possession of the Dharmakaya.
It is not realised through external conditions, because the self-cognizant primordial wisdom is to be realised by oneself.
It is knowledge, because it is realisation of the three previous qualities.
It is compassionate love, because it shows the path.
It is the capacity to help sentient beings, because it removes the suffering and the obscuring states through primordial wisdom and compassion.
The first three qualities make up the benefit for oneself, the latter three the benefit for others.

THE DHARMA
Homage to the Dharma
The Dharma is neither non-existent, nor existent, not a combination of existence and non-existence, nor something different from existence and non-existence. It cannot be examined nor pointed out through definitions and it can only be understood by self-cognizing wisdom. It is perfect peace.
The Dharma is stainless, illuminating by the light of primordial wisdom. It completely overcomes all attachment towards (attractive) objects, aversion towards (unattractive) objects and ignorance towards (neutral) objects. In front of the true Dharma, which is like the sun, I bow down.
The Dharma has the characteristics of the two truths, the Truth of Cessation and the Truth of the Path:
· It is inconceivable, without the two (roots of samsara) and non-conceptual.
· It is pure, illuminating and has the capacity to be a remedy against obscuring states.
The Truth of Cessation is freedom from attachment and the Truth of the Path is the method which removes the attachment. The Dharma can be summarised into these two aspects. One should know that these two have three qualities each which are presented in the above order. The Dharma is inconceivable, because it cannot be analysed by ordinary thinking (in terms of the four alternatives), because it cannot be expressed through words and because it can only be understood by the wisdom of realised beings (the Noble Ones).
It is without the two, because (karma and obscuring states have been) pacified.
It is non-conceptual, (free from the causes of obscuring states).
Also the Dharma has the three qualities of being pure, etc..(Purity means being free from disturbing emotions and habitual tendencies, illuminating means to be free from conceptual obscurations and the capacity to be a remedy means that it functions as an antidote against all obscuring states.) Therefore it is like the sun.

THE SANGHA
Homage to the Sangha
Because they have realised the Clear Light-nature of the mind, (the Bodhisattvas) see that the obscuring states have no essence at all. Therefore, after having perfectly realised the peace which is the ultimate selflessness in all sentient beings, they see that all beings are pervaded by perfect buddhahood.
The Bodhisattvas have mastered intelligence which is free from veils. Their primordial wisdom has as its object the completely pure nature which is present in limitless sentient beings. In front of the Sangha I bow down.

The non-regressing Sangha of the wise have unsurpassable qualities, because through the pure vision of their primordial wisdom they see
· everything just as it is,
· everything to its full extent and
· the inner wisdom (the source of the other two).
Because they have realised the true nature of all phenomena (skr. Dharmata) which is the pacification (of all mental fabrications) in sentient beings, they possess the wisdom of everything just as it is. This is completely pure by nature, because the obscuring states never existed from the very beginning.
By means of their intelligence which realises the ultimate objects of knowledge they see that the true nature of omniscience (the Buddhanature) is present in all sentient beings. Therefore they possess the wisdom of everything to its full extent.
Such realisation is perception which is based on non-dual insight (the inner wisdom).
· It is pure, because it is the stainless sphere (the Dharmadhatu)
· which is free from attachment and cognitive obscurations.
· Because this pure vision of primordial wisdom is very close to the unsurpassable wisdom of buddhahood,
the Noble Ones, who do not fall back (into samsara), are a refuge for all sentient beings.
(The first three qualities are called 'qualities of insight', the latter three 'qualities of liberation'. If these two headlines are added to the six qualities, they make up eight qualities altogether, in the same way as it can also be counted in the two previous parts about the Buddha and the Dharma.)
The reason for presenting three objects of refuge
The three objects of refuge which are the teacher, the teaching and the students (Buddha, Dharma and Sangha) are presented in terms of those who strive for the three kinds of activities according to the three vehicles.
(The presentation of the three objects of refuge corresponds with the practitioners of the three vehicles in the way that the refuge of the Buddha is for the practitioners of the Mahayana vehicle, the Dharma for the Pratyekabuddha vehicle and the Sangha for the Shravaka vehicle. These practitioners strive for the three kinds of activities in the way that those who have devotion towards the Buddha regarding him as the supreme among human beings can reach the same state by accumulating positive potential through making offerings, prostrations, etc.. Those who have devotion towards the Dharma regarding it as the supreme among all teachings which is completely free from obscuring states can practise the Dependent Occurrence and in this way reach the state of an Arhat.
And those who have devotion towards the Sangha regarding it as the supreme among all communities, because it is a perfect assembly, can enter the Sangha and reach the respective realisation of the Shravaka vehicle.
Normally individuals develop on the path by starting out on the Shravaka vehicle entering the Sangha, then they go on to the Pratyekabuddha vehicle practising the Dharma and finally they progress to the Mahayana vehicle, the ultimate vehicle, opening up for the state of a Buddha. So the reason for presenting the three objects of refuge is the threefold benefit for the three categories of practitioners.) 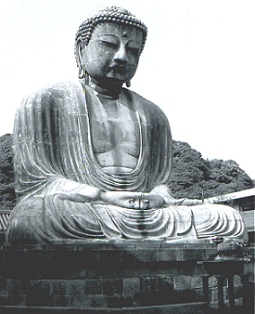