The Bardo between Birth and Death

There are four types of Birth :

1) Womb-birth, as experienced by humans, animals and hungry ghosts.

2) Egg-birth, as found mainly in the animal realm.

4) Miraculous-birth like that of Guru Rinpoche, who was born from a lotus in Milk Lake.
There are two types of Miraculous-birth. There is the birth into a Pure Land, and a lesser
kind which occurs when one enters the intermediate state.

All four types of birth involve a dissolution of the elements. The earth element is present in
all of these. The water element holds the other elements together, and their temperature is
represented in the fire element. Respiration, which functions to keep a balance, is
represented by the air element. There is a strong inter-relationship between external and
internal elements and the combination of both elements and consciousness is what
constitutes a living being. Due to the coming together of these factors, sooner or later they
are bound to fall apart. This is the Bardo of Experience. The type of bardo to be
experienced is determined by one's own karma and also one's timing. Just as time
constantly passes, so does one's life. Lama Chime Patrul Rinpoche once said, "From the
moment we are born our life is getting shorter.

It is like the action of the sun which rises and then sets." The duration of one's life
depends on one's individual karma. The length of one's life is indefinite and the means of
losing it are limitless. Due to these factors it is important to practise dharma and make
good use of our life - not just in theory, but in practice. We have got to realise our body is
a changeable object. Even though most people believe the world exists as it appears, it
doesn't. It changes constantly. Unfortunately we take our deception as our reality. Life
really is no more than a reflection of memories. If things truly existed as they appeared
they would stay that way forever. A few weeks ago when we were in Australia I met up
with a close friend of mine, Jigsay Rinpoche. He is younger than I am and I have known
him for many years but last night we heard the sad news he had just passed away.
Through the practice of meditation you come to realise that the experience of the dream
state is not so different from the waking state.

Preparation for our death must start now before it happens, while we are still alive. If you
realise how indefinite time is you make the best use of it. A meaningful life means a useful
life but it's entirely in your own hands how soon you practise. Among the six realms of
existence, rebirth in the human realm is the result of an accumulation of incredibly good
fortune. As such we should not squander it. On the basis of this good fortune we should
strive to reduce our negative actions as much as possible, step by step. One should not
be careless; actions are like a spark in a haystack or an accumulation of drops that
eventually becomes an ocean. There are ten wholesome actions which are to be cultivated
as an antidote to the ten unwholesome actions, but you can only practise them effectively
if you have as the basis the enlightened attitude. When you commit unwholesome actions
there is no positive result.

Passion, aggression and ignorance are the three root poisons. Passion is a positive
action, aggression a negative action and ignorance a mental action. Passion, due to the
influence of our confused mind, brings about a type of temporary benefit, but it is subject
to change and eventually causes yet more suffering. Milarepa, in one of his songs, likened
passion to a wish-granting gem. Having got the object of our dreams it doesn't take long
before we realise just how dependent we become on it and the problems it causes.
Eventually we have to separate from that object, whatever it may be. It is like a bee that
collects pollen to make honey which in turn is taken and used by someone else. The root
of passion is desire-attachment and like the two other poisons its nature is suffering.
Passion is like an itch. The more you scratch, the worse it becomes. The best solution is
not to scratch, but to let the itch go by itself. The idea is not to cling too much to
samsaric activity. This particular bardo - the Bardo between Birth and Death - is the only
one within which we can make a determined change.

It is important to recognise what makes a mind deluded and to recognise its nature. When
we visualise the form of a deity, the idea is to exchange our ordinary deluded mind with an
enlightened one. This is the technique of Tantra. In Chenrezig practice we not only
visualise ourself as Chenrezig but all living beings as Chenrezig. We also visualise the
universe resounding with the Chenrezig mantra, and transform our thoughts into the nature
of thoughts - Dharmakaya. 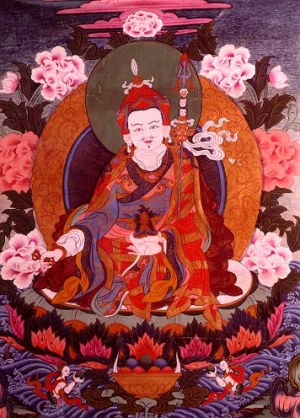